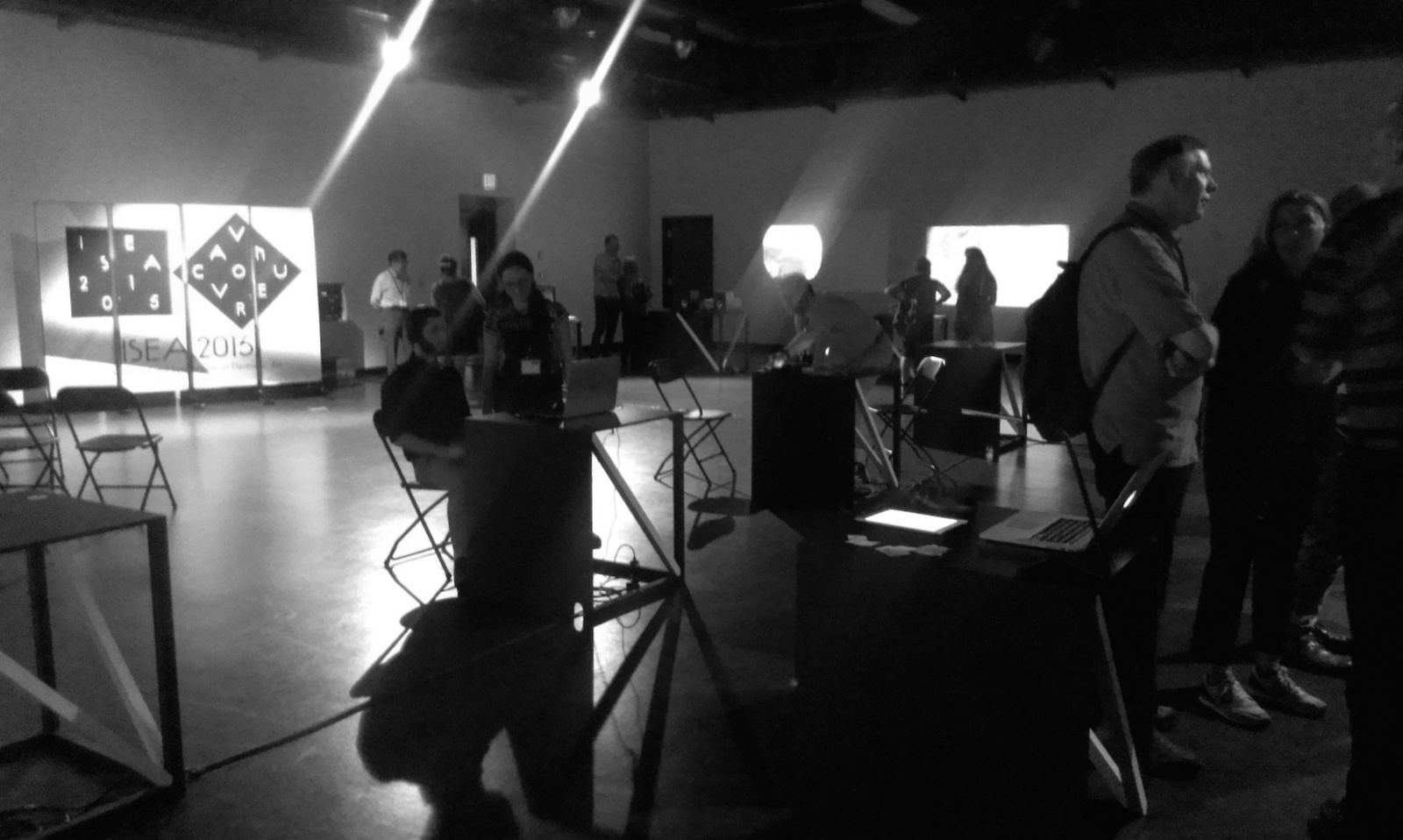 This year’s International Symposium on Electronic Arts was focusing on disruption and artistic interventions in general. The topic is extremely relevant these days, especially when we get to interdisciplinary discoursions and practices across art, the digital rhizome, science, design an technology. The landscape and the venues of Vancouver gave a special taste for the whole gathering. At least for me, contemplation in nature, vivid discourses in darkened rooms, crazy noise performances went hand-by hand during the event thanks for the fusion of nature and urban sites within the city.

I held a one day workshop on creative coding, with an intent on making sonic instruments using the free open source languages Processing and Pure Data. However, the discussion went far beyond covering the workshop examples and syntax problematics. Thanks for the diversity and knowledge base of workshop participants, different type of interests arised and we suddenly found ourselves in interesting conversations such as visual programming versus textual programming in general, the philosophy of debugging and individual artistic methods for programming. Thanks for the inspirative words again for all, this was a truly revelating session for me too. You can get an overview of the concepts from the workshop in this video:

One thing became clear during the session: the importance of interconnectivity of open platforms and languages that make a large difference in contrast to previous media art practices where tools belonged to (and developed by) monolithic companies. During our conversations, Bill Manaris came up with the excellent examples of Jython Music, where makers are able to create and solve high-level musical sonification problems, investigate the mathematics and arithmetics of music. That system is really interesting and worth to have a deeper look. The well documented examples would be really interesting to adapt in future workshop scenarios. There were also inspiring thoughts on visual programming in general, such as a “clock-work” engine, where programmers don’t think in terms of lines of code, but more like a clockwork, where rightly interconnected parts are working well together. Bangs, messages and dataflow states indicate the operating level of the code constellation. Metaphores are useful to learn and interpret new ideas.

As we went towards into the symposium, I found several interesting concepts at the Machine Listening for Music Generation workshop. AI, machine listening & learning, genetic algorithms are fullfilled with metaphors too, the reason for this perhaps might be similar to the visual programming scene mentioned above, just with higher complexities and abstraction layers. Whereas machine learning and AI in general is quite huge these days, I think, the phenomen itself would worth a symposium to highlight its concepts and clarify misunderstandings around it. As David Karam writes at his page:

"(Machine learning) succeeds where deductive logic fails us. What’s the formula for recognizing handwriting, or for composing music? By induction, examining lots and lots of similar examples—sometimes with human supervision and sometimes without—neural networks come up with successful predictions and classifications. A machine that learns from example, without explicit instructions, has incredible implications. I suppose that is why so many are concerned that it might lead to our end. [...] But, using the term “neural network” implicitly claims that these statistical models function like the brain or human intelligence. While that may be the stated goal of AI researchers, really, that’s begging the question. The computer “neuron” is a metaphor. We can call it that because it does some things with results that are human-like and have configurations that are somewhat neuron-like. But there is only a loose relationship between the computer model and the brain. The inner workings of both kinds of neurons are still mysterious. Training a network is not the same as learning."

The topics covered by the workshop were such diverse in a niche field that were really surprising. Just to mention a few: Multi-objective genetic algorithms are an approach to be able to keep in mind several parameters the same time, during music segmentation and classification. The two papers Chord Sequence Generation with semiotic structures and Generation of Jazz Guitar Ornaments are topics that I didn’t think of where artificial intelligence could make a role. It is really interesting how examining, analyzing and reordering (not only musical) data can be made by some simple, finely crafted automated algorithms. 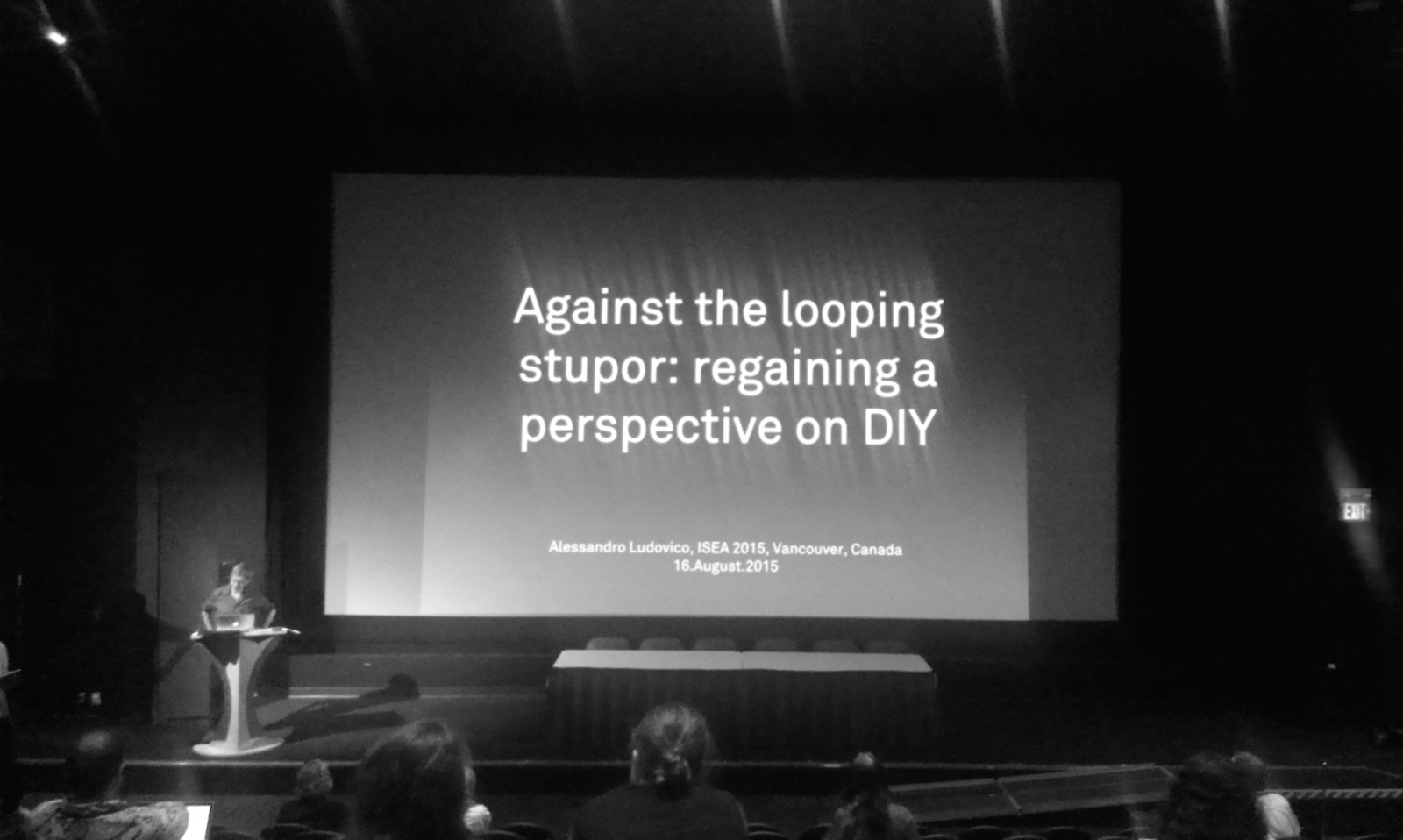 After this workshop, the following keynotes and presentations were covering all the actual fields of digital media and corresponding creative processes. I was really glad to see a panel that is about DIY processes, as this direction is the future of digital making, activism and self expression. Moving from a field that is originally shaped by closed source and elite institutions to a more democratic and open field of the DIY is a very important aspect of todays movement in art and culture in general. Alessandro Ludovico presented new ideas of interconnected 3D fabricated objects as a new paradigm for collaboration, while the presentation of Abigail Susik on Mimesis and Code: The Aesthetics of the Microcontroller in New Media Art was at least questioning if not redefining the well known analytic structures that are applied in different art practices. 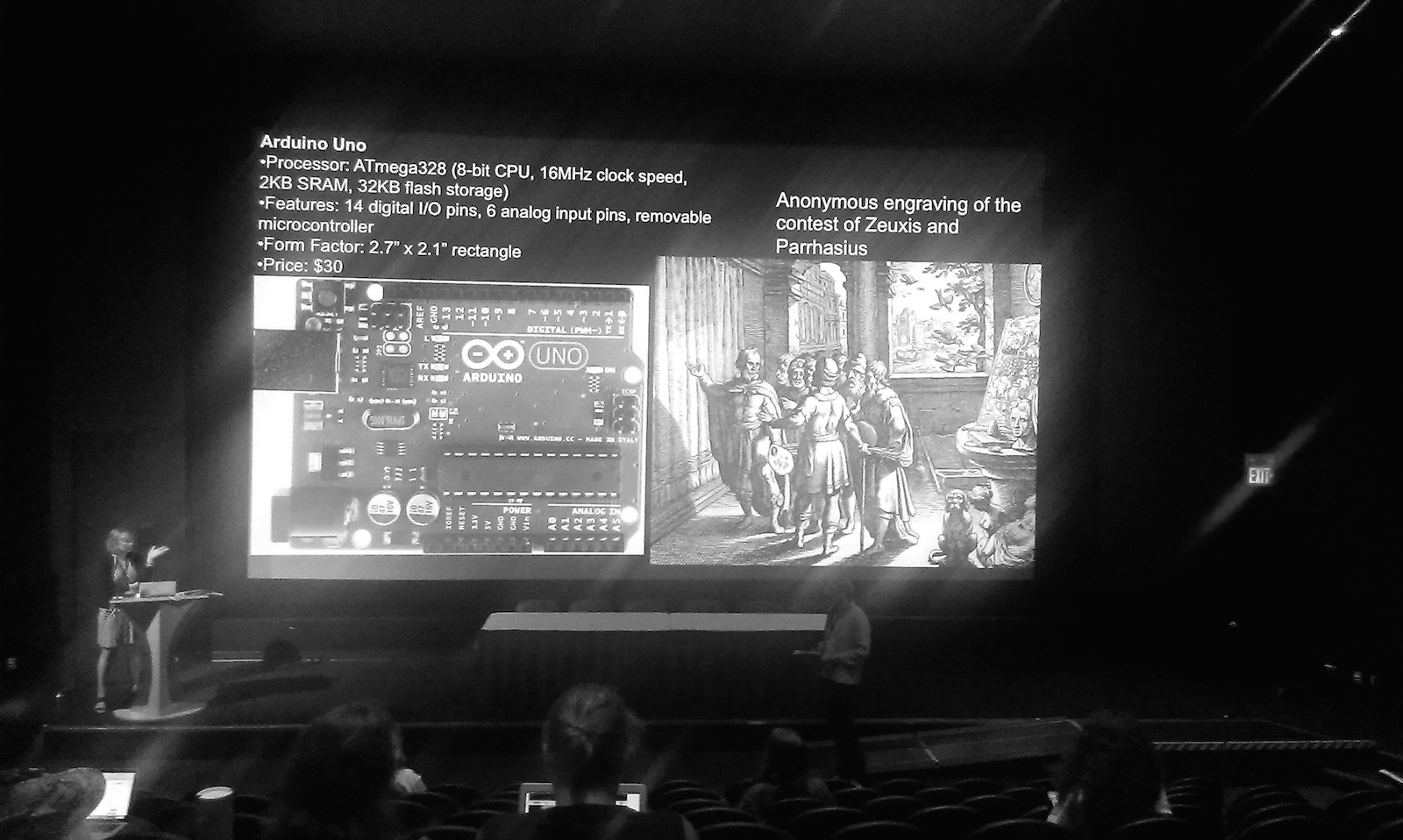 By putting the microcontroller in the core proccess of the creative flow, we can extend existing ideas & concepts from as far as the ancient arabic automations or the competitions of renaissance painters into our very present phenome of digital art, technology and cultural practice.

It was a hard task to cover 30 years of visualization during the session within a few hours later on, but the keynote of Donna Cox on the existing concepts and methodologies was a relevant one. The possibility of stumbling into traps and loops even with the most sophisiticated methods of data mining and representation techniques is a very useful warning sign for all who are working with data. The speech on the overview of the more recent, past few years of data (and media) visualization by Lev Manovich gave a hint on at least a few aspects of the whole scene. By reintroducing the conept of social physics it was interesting to hear about the shift of focus in the representation of media & data in science from natural physics such as gravity, space, time and traditionally measurable units to the so called “social physics” where statistically based interrelationship between people, society and everyday routines are observed through data. Visualizing media instead of data (where media can be image, video, sound, profiles instead of raw numbers themselves) is a huge challenge that we will face in the forthcoming decades. The highlighting of the introduction of APIs in the middle of the 2000s was also important, since the widening use of these open APIs (first Flickr, then Twitter, and all the other companies are introducing their own apis) are gaining this paradigm shift by making data and complex media available based on simple queries and API calls. Since APIs are becoming more and more influential in our software based ecologies, it is also worth to note at this point, that these methods are changing rapidly, based on the decisions of different, large scaled companies, so they are ephemeral, changing the role of a programmer from an independent state to an ever-dependent struggle, where she needs constant attention to maintain and consider new changes and restrictions. Also, in general, APIs move focus from writing good code to writing good queries and embeddable, tiny snippets. I personally find this an issue that might worth a symposium in itself, too.

As for disruption, the best possible choice from the Symposium was to close the whole session by non others than the Yesmen who were introducing their next projects and some recent activities during their keynote. If anyone, they do something for a change in our society, on a level that is hard to interpret. They introduced the Yes Lab where people can launch their campaigns, flashmobs and activities on a crowd based model. They also let us see some parts of their forthcoming movie that documents their presence in the global fight for a better living in the new climate conditions, the changing ecosystem of our earth through politics, social activities using different communities including college students, field experts and everyday people. Thanks for the organizers and the attendees, this whole event was one of a very inspiring one. Hope to see more to come.

We were invited to give a workshop at the Arduino Day, 2015 / Budapest where we made some really fun robots and creatures with the participants. The atmosphere, the place (Prezi HQ) and the organizers were amazing, many thanks for all who made the event happen. Before the end of the workshop we were able to live connect with the makers of Arduino, too, Massimo Banzi (who was at MIT at the time), David Cuartielles, and all the different people in the community in the US, Sweden, India and of course Italy. 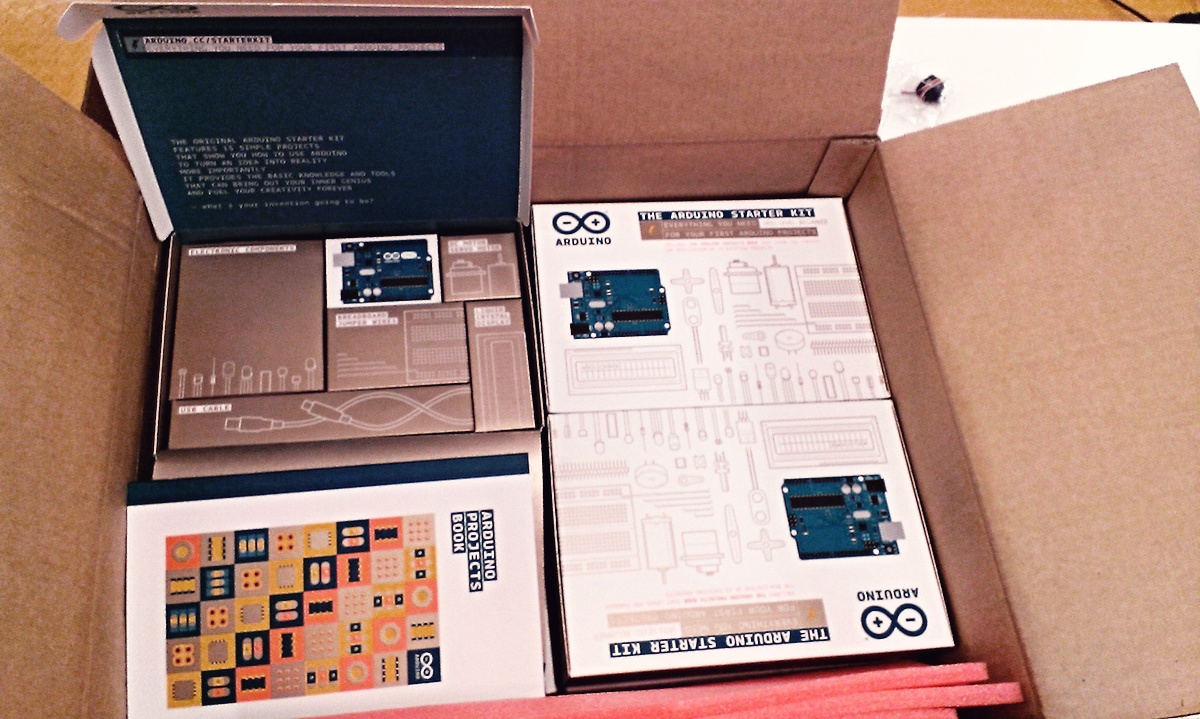 We were able to use brand new & beautifully designed Arduino Kits from the Arduino Budapest crew, kudos for their kindness! The workshop went really well, we've built interactive, moving creatures in less than 4 hours using our newly developed Opto Interface that makes it easy to control your Arduino directly using images, videos and live visual media from your computer. The core idea of Opto is based on optical devices (hence the name) where visual information is used as control messages for different systems. It is a software developed for the Arduino platform that lets its user interacting with actuators such as LEDs, motors in a playful way that requires no programming. More on this tool soon, stay tuned. 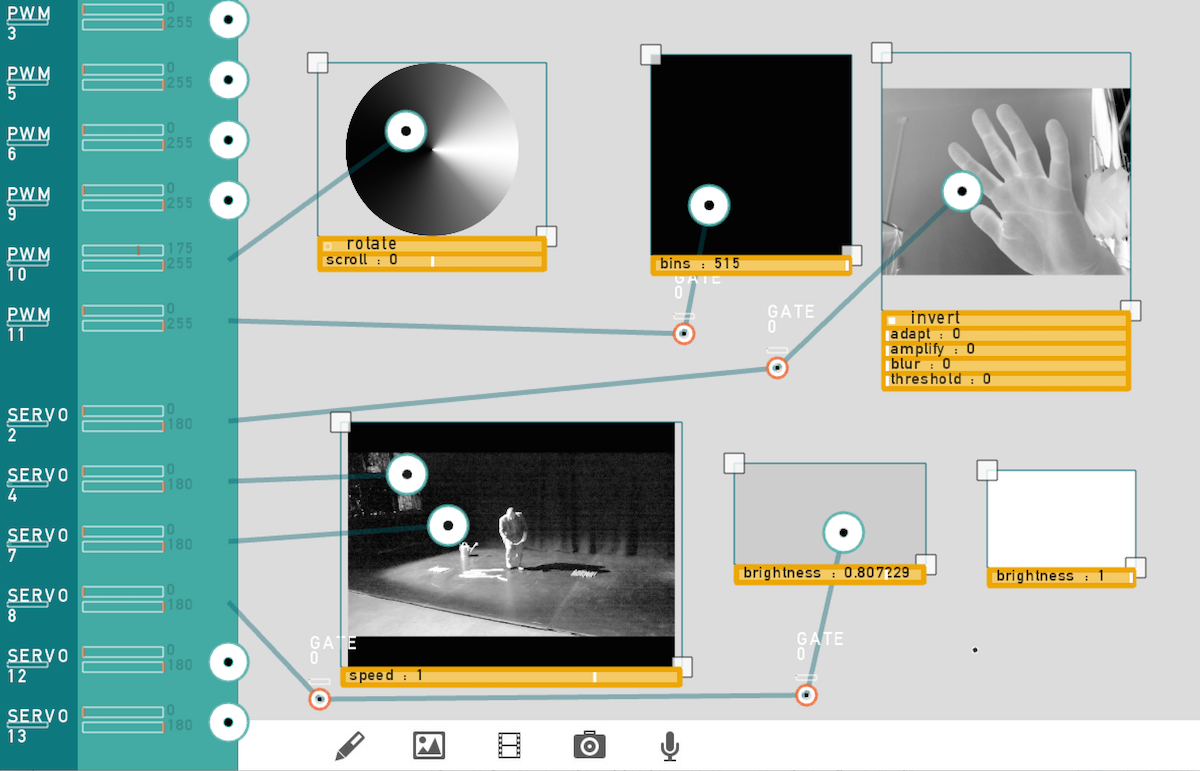 The participants assembled different everyday materials, plastics, glasses, tools, tapes and attached some servo motors to them. We were investigating basic (object based) interaction design questions, control methodologies, using interactive visual patterns to "code" movement in different ways. Some photos from the event: 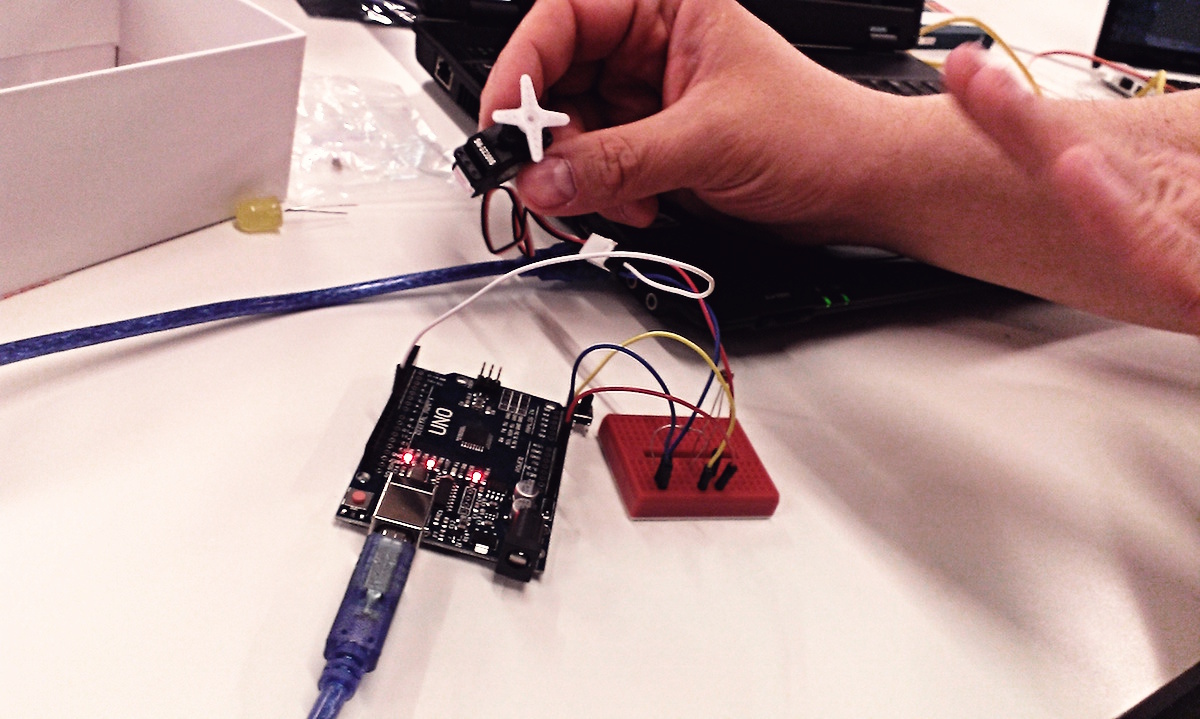 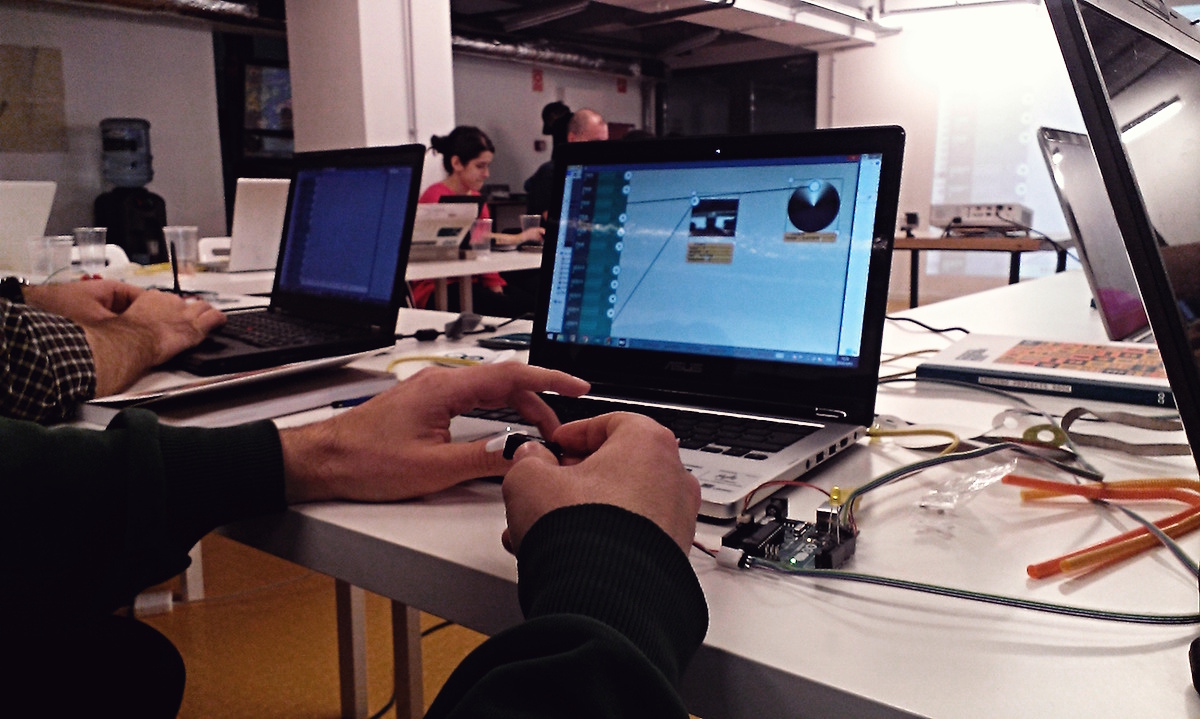 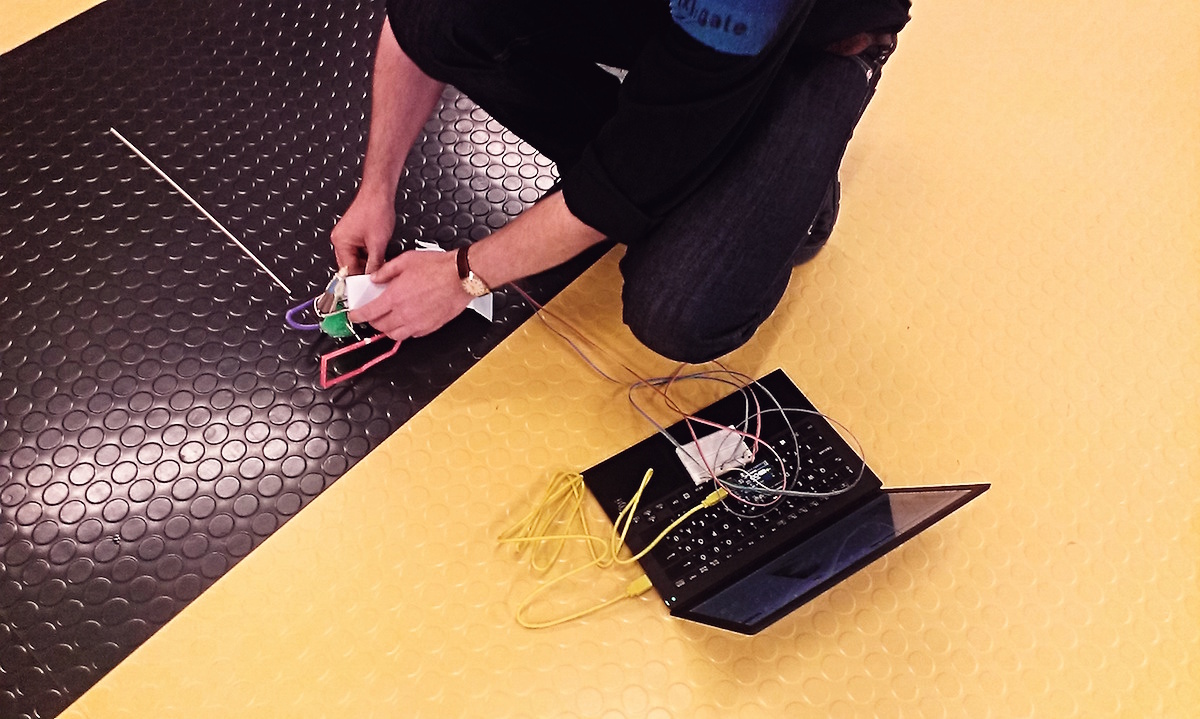 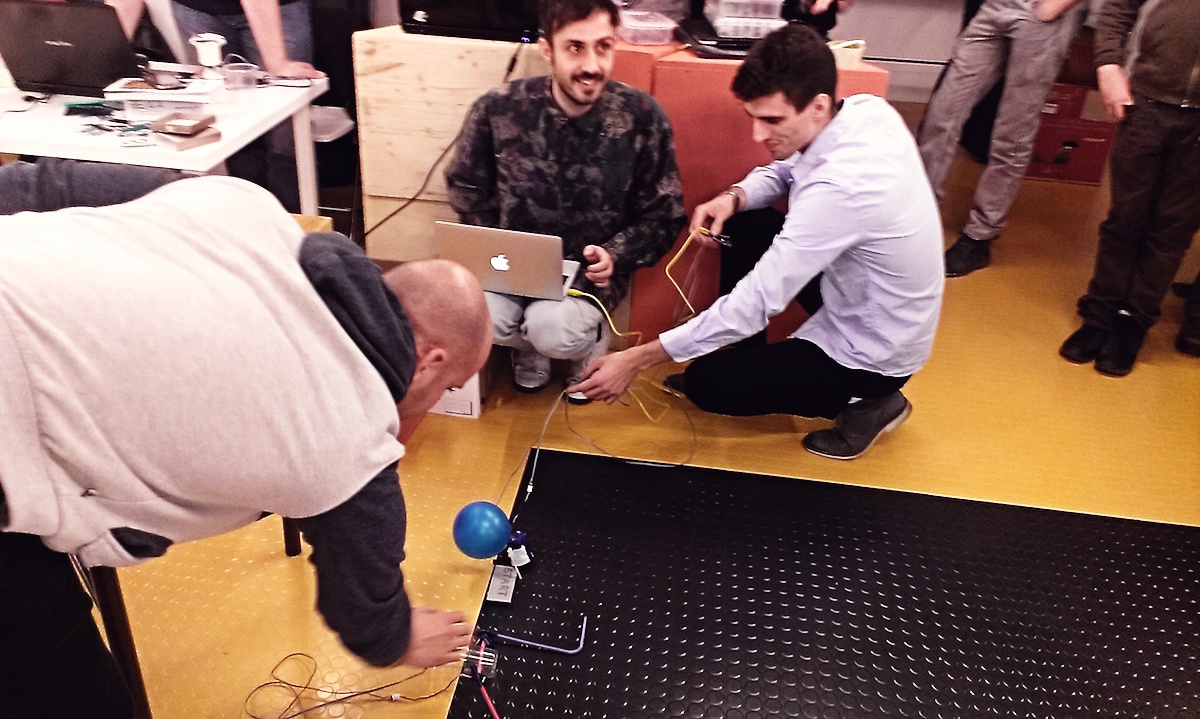 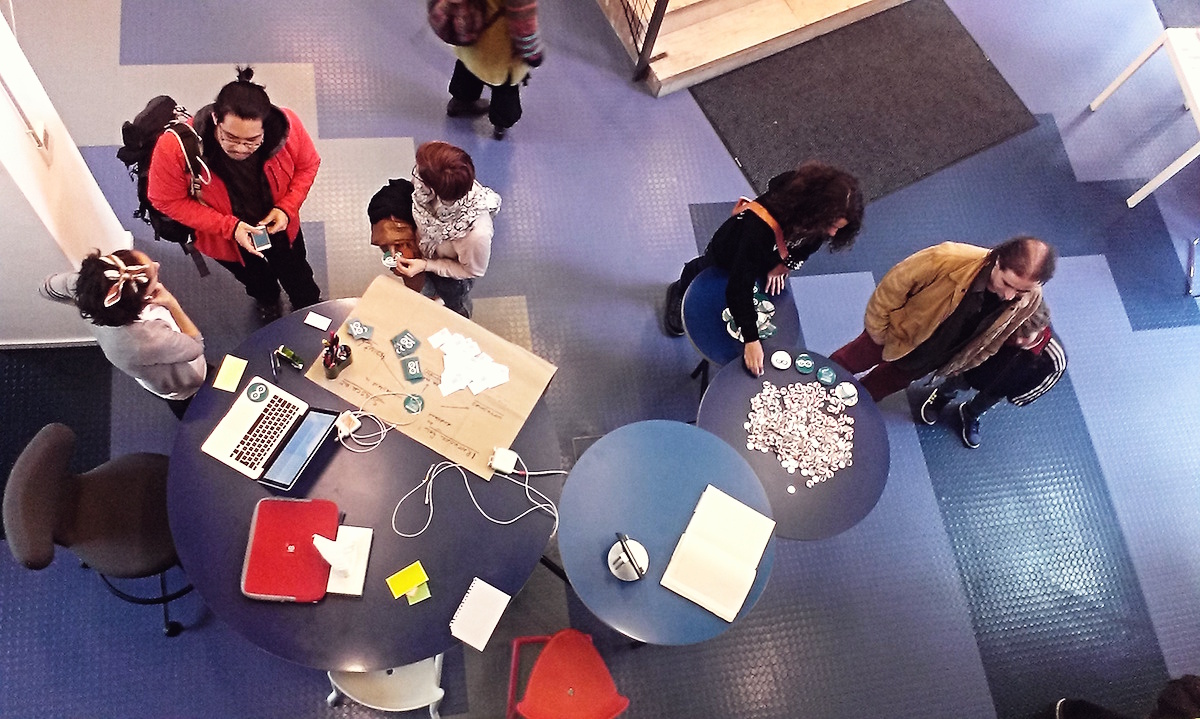 We talked a bit about our Led Printer project at the evening presentation, where we were describing our experiences on how to control and draw into the sky using a drone, equipped with LEDs and an Arduino. The other presentations were also really inspiring, it's really great to see the widening of a truly open community.

Thanks to Eszter Bircsák and the Arduino Budapest Team for the event. Happy 10th Birthday, Arduino!

3D slit-scan turns space inside out

Description:
Trying to create a unique 3D space using the classic slit-scan technique while taking into account the depth values of each pixels. The realtime data is represented as a sphere where pixels close to the camera are paced on the edge of the sphere, while faar pixels are pulled inside. This transformation turns space inside out. 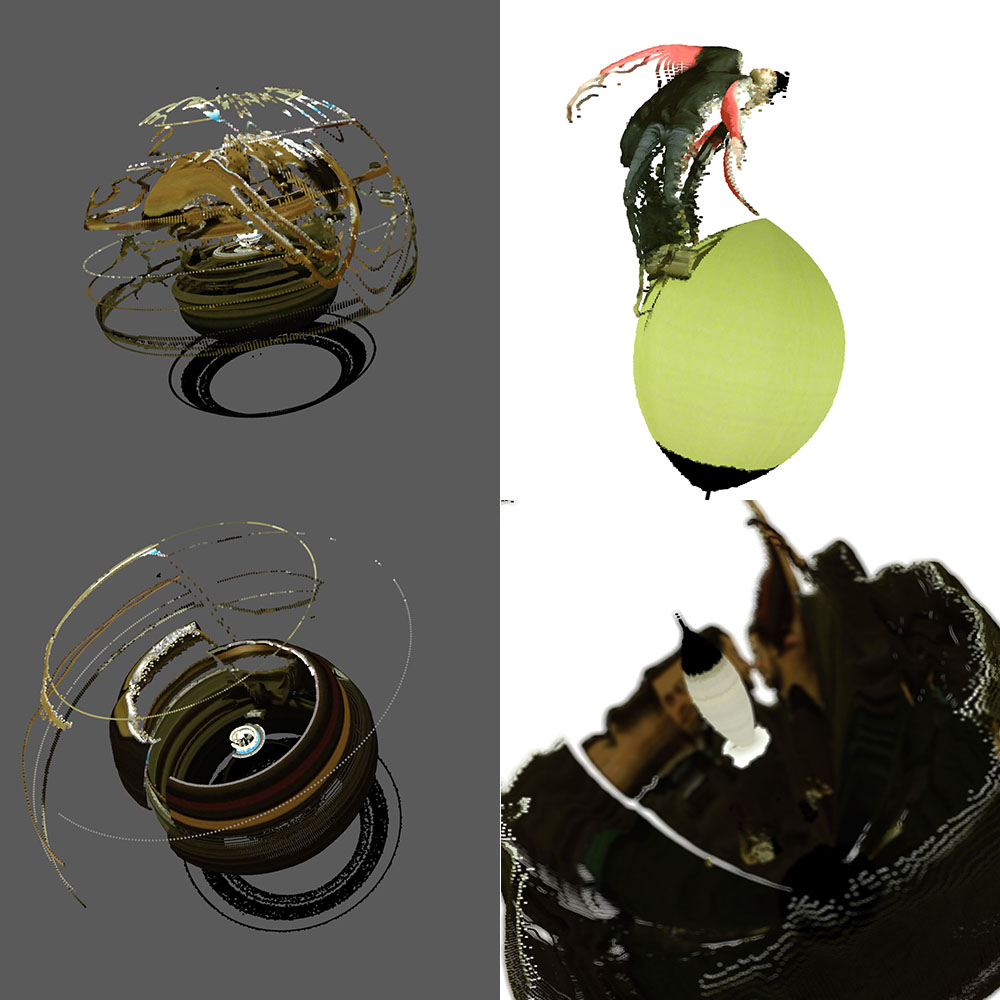 Description:
Waterdrops are used to create an aleatoric music composition that is freely interchangeable by the audience. When each drop reaches its destination, a sound is triggered, and a corresponding animation has been played. The nature of the sound (pitch or different sound samples) can be selected via a midi controller, whereas the rythm of the composition is defined by the configuration of the different infusion systems that are controlling the speed of falling drops. the installation had two previous states in Mezőszemere (H) and in Dortmund (D). Each incarnation is different from the previous one.

Vizes város (aka water city) is a series of workshops where this work has been introduced among others. This piece was connected to an animation workshop for children where they were able to

learn about the basic principles of animation and visual music

Interactive animation for the Hamvas Béla exhibition at Szentendre (2014)